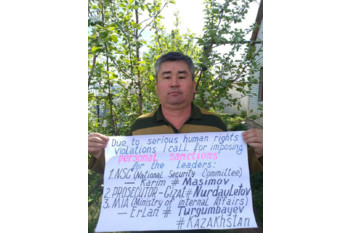 On 18 November 2021, a hearing was held in the politically motivated criminal case under Article 405 Part 2 ("participation in an extremist organisation") against a civil activist Orynbai OKHASOV.

⠀Judge Kairat UTESHEV unlawfully sentenced Orynbai OKHASOV to 1 year of restriction of liberty, a 1-year ban on social and political activities and the use of social media, as well as ordered him to pay a mandatory payment of 29170 tenge ($67) to the "Crime Victims' Compensation Fund" and 100 hours of community service.

- Calling for and participating in peaceful protests, subbotages (evening marches);

- Demanding the annulment of the decisions of the Yesil court banning the "DCK" and "Koshe Partiyasy" movements;

- Demanding the release of political prisoners and to stop political repression;

- Peaceful protest against Chinese expansion and construction of 56 Chinese factories in Kazakhstan, against sale of land to foreigners;

In its resolution of 11 February 2021, the European Parliament has condemned the abuse of anti-extremism legislation by the Kazakhstani authorities to persecute supporters of the peaceful opposition movements “DCK” and “Koshe Partiyasy” and called on the Kazakhstani authorities "to drop politically motivated charges and end all forms of arbitrary detention, reprisals and harassment against human rights activists,  religious organisations, civil society organisations, trade unions, journalists and political  opposition movements".

We call on the US, the EU, the UK and Canada to impose personal sanctions on: the head of the NSC, Karim MASSIMOV; the Prosecutor General, Gizat NURDAULETOV; and the Minister of Internal Affairs, Yerlan TURGUMBAYEV.