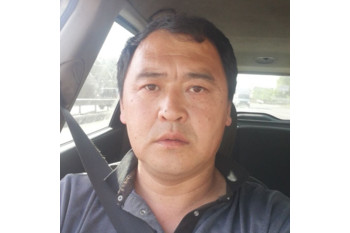 On 16 August 2021, at 14:30, there will be an online trial in the politically motivated case under Article 405 Part 1 and Part 2 ("organisation and participation in an extremist organisation") against political prisoner Ulasbek AKHMETOV.
⠀
Ulasbek AKHMETOV is being prosecuted for:
- demands for the release of arbitrarily arrested civil activists.
- participation in peaceful protests.
- discussing and making posters for peaceful protests.

In its resolution of 11 February 2021, the European Parliament has condemned the abuse of anti-extremism legislation by the Kazakhstani authorities to persecute supporters of the peaceful opposition movements “DCK” and “Koshe Partiyasy” and called on the Kazakhstani authorities "to drop politically motivated charges and end all forms of arbitrary detention, reprisals and harassment against human rights activists,  religious organisations, civil society organisations, trade unions, journalists and political  opposition movements".
⠀
We call on the US, the EU, the UK and Canada to impose personal sanctions on: the head of the National Security Committee, Karim Massimov; the General Prosecutor, Gizat Nurdauletov; and the Minister of Internal Affairs, Yerlan Turgumbayev.
DCK (Democratic Choice of Kazakhtstan opposition movement)*
Koshe Partiyasy opposition movement**
Поддержите проект